Filmmakers will in future find comprehensive information on the subject of film and filming in Frankfurt at www.filminfrankfurt.de . With this new service Frankfurt pleads for itself as modern shooting and production location and positions itself as a movie-friendly city.

For the various questions of the filmmakers Frankfurt Economic Development GmbH, Tourismus + Congress GmbH Frankfurt am Main, Service Center Events /Regulatory Office, Culture Board as well as Press and Information Office of the City of Frankfurt will be the contacts within the city council. The new website created under the auspices of the Frankfurt Economic Development GmbH bundles all relevant information and contacts and thereby provides a comprehensive resource for shootings and film productions in Frankfurt. 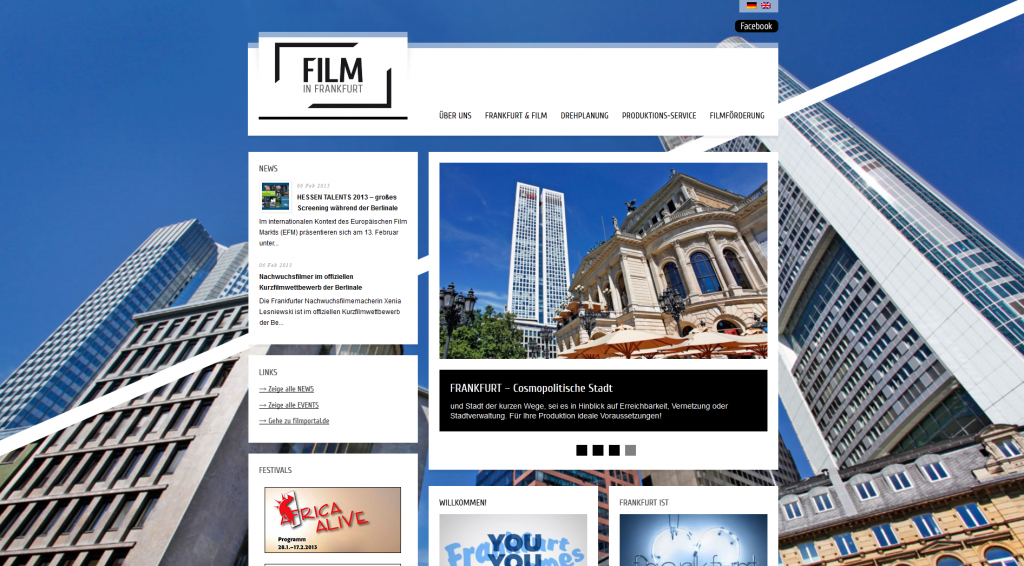 With this new offer, Marcus Frank, Deputy Mayor and Head of Department of Economy, City of Frankfurt hopes to inspire and to excite more filmmakers for Frankfurt: “Frankfurt as a location offers backdrops for scenes of any genre and with its film and servicing companies forms an exciting production site. With the new services, we want to make it clear that the city council is flexible and primarily modern movie-oriented. We are happy about every film project that will be realized in Frankfurt. Because every movie produced in Frankfurt also promotes the city and the local film industry. ”

Frankfurt Film Website is online just in time for the biggest international trade event, the Berlinale. To make international producers aware of Frankfurt, too, of course, the offer is available in English as well. Frankfurt Economic Development GmbH, Tourismus + Congress GmbH Frankfurt am Main as well as the Press and Information Office will be in Berlin to promote for the shooting and production location and www.filminfrankfurt.de